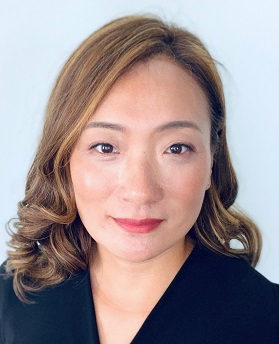 Power electronics are the enabling technology of the modern power industry and have revolutionized the industry with developments in excitation systems, High Voltage Direct Current (HVDC), Static var compensator (SVC), Static Synchronous Compensator (STATCOM) and converter systems for coupling distributed generation to the grid.  Power electronic converter systems are also at the forefront in the development and deployment of battery energy storage systems which are a significant factor in the long-term development of power system with declining use of fossil fuelled synchronous generators.

The first major power electronic component to impact the power industry was HVDC. HVDC technology was first commercialized in 1954 to transmit power energy from generation stations to load centers through long distance overhead line and/or cables, as well as for interconnecting asynchronous systems.  The initial HVDC systems used mercury arc valves as the power switching element but the success of these systems was driven in large part by solid state electronics which made possible precise and reliable control systems needed for current and voltage control.

With the development of the thyristors in 1957, the technology was quickly adapted for use in the power industry and by the late 1960’s within a little more than a decade, the thyristor had become the technology of choice for HVDC systems.  Until late 1990s, the predominant HVDC technology was Line commutated converters (LCC) based on silicon power thyristors which continued to increase in voltage, current and power handling capability.  The increase in power electronic device capability allowed the development of ever larger and more capable HVDC system designs based on modular architecture that could be flexibly applied to provide almost any combination of voltage and current rating in an optimal configuration for each project with power ratings spanning four orders of magnitude from 10MW to 10GW.

In parallel with the phenomenal advance in power handling capability of power thyristors, the power handling capability of MOSFET transistors (IGBTs) was also increasing and applications with significant power output up to several hundreds of kW were developed in the industrial arena primarily for variable frequency motor drives.  In 1997 a major milestone in HVDC was achieved with the introduction of the first, voltage sourced converter (VSC) HVDC using power transistors initially as a technology for connecting windfarms to AC system using cables where the use of overhead lines was constrained.

VSC technology enabled the industry to overcome the requirement for line commutation and for the first time, HVDC systems were able to actively control both active and reactive power flow at both sending and receiving stations similar to synchronous generators. Recently, the feasibility of transmitting up to 2GW per system using VSC technology is being researched and engineered for both offshore and onshore windfarm interconnection.

As of this date, more than 150 HVDC transmission systems and 48 back-to-back converter stations have been built worldwide including 44 international system interconnections.  Figure 1 shows the DC voltage and DC power ratings of most of HVDC transmission systems constructed and in operation since 1970 and includes a few of the significant historical milestones in HVDC development.

Global environmental concerns including both the direct effects of pollution and the role of atmospheric carbon dioxide in climate change are driving the power industry to pursue more cleaner and sustainable power generation while phasing out traditional synchronous generation based on fossil fuels.  Renewable energy such as wind and solar power are growing rapidly worldwide with major concentrations of wind planned or under development in the North Sea in Europe, North America, and Asia. Many countries aim to achieve 100% renewable energy by 2050. The key challenges associated with exploitation of these renewable generations include:

Frequently, HVDC technology is either the only technically viable technology or the most economic solution to enable more effective integration of the electrical network and the renewable resources as it offers advantages from the following perspectives.

In addition, VSC HVDC has proven to be a very suitable solution for offshore windfarm connection through XLPE cables since

The establishment of an energy market that can effectively share and utilize all the available energy resources requires the development of extensive network interconnections. HVDC transmission is seen as an enabling technology for providing the necessary interconnections in Europe and elsewhere in the world due to its cost advantages and controllability. The HVDC interconnection between France and Spain commissioned in 2015 designed as two identical but independent VSC links is Europe's first DC onshore interconnection system being integrated into the existing synchronous AC grid, which enables a closer convergence in electricity prices in the European countries that are linked to the markets.

Back-to-back HVDC interconnections provide circuit interconnectivity wherever side by side asynchronous AC systems exist due to their ability to directly control the power flow. For high-capacity back-to-back systems, the unique advantages of both LCC and VSC technologies can be used to provide a more flexible and reliable system integration. A hybrid VSC and LCC back-to-back HVDC system has been constructed to interconnect Yunnan grid and main China south grid to improve the grid voltage support during emergency conditions. Parallel operation of LCC and VSC converter stations provides both bulk power transfer capacity with transient overload capability through LCC converters as well as improved ac system voltage support by VSC converters.

The development and maturation of reliable HVDC breakers has increased the interest and the prospects that HVDC grids will develop in parallel with or alongside with conventional AC grids. This will require further feasibility studies and technological developments such as dc grid protections and controls, DC-to-DC converters, and current limiting devices.

Thus, the number of DC systems will continue to rise to integrate the dispersed offshore wind power plants, and to transmit bulk onshore wind/solar power or remote hydropower resources to load centers. Figure 2 shows the number of HVDC projects constructed since 1954 (excluding the back-to-back systems) and extrapolate the recent trends up to year 2050. The significant increase in the number of HVDC projects built during the period from  2010 through 2020, coincides with the fast development of offshore windfarm interconnection which was enabled in large part the maturing of VSC technology. Both LCC and VSC HVDC technologies are suitable for Integration of renewable energy.  LCC HVDC will continue as the workhorse for high power point to point interconnections. VSC technology is however closing the gap with rapid increase of power transfer capacity and the number of VSC applications will most likely grow faster compared with LCC HVDC during next 30 years. Another interesting development is the first Hybrid HVDC project consisting of and combining the benefits of both LCC and VSC technology.  Recently, the first high voltage and high power, three-terminal LCC/VSC hybrid HVDC system, Wudongde (800kV/8000MW) has been commissioned, a new milestone in the DC world. 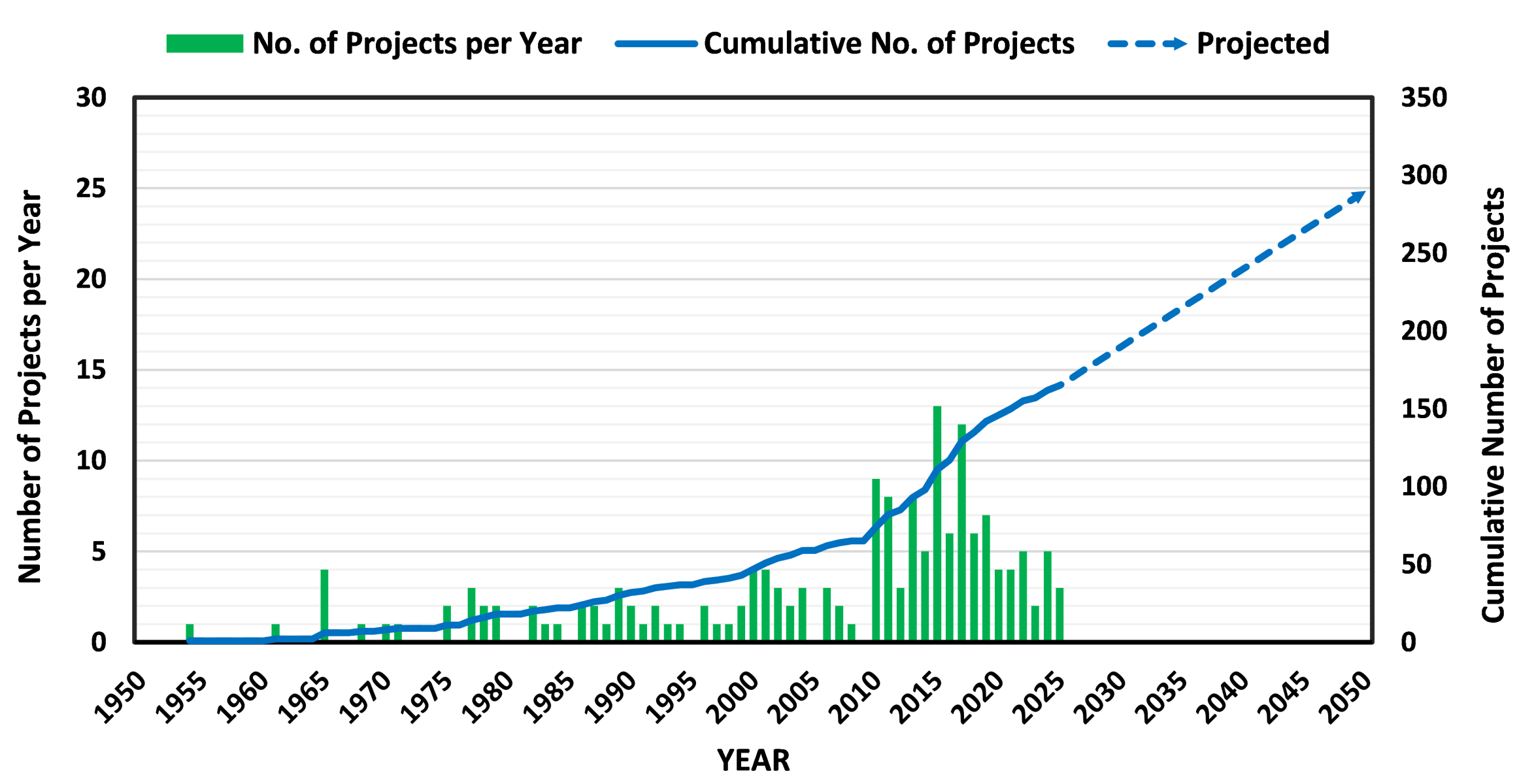 Figure 2 – Trend in the numbers of HVDC Transmission Projects – Constructed, Planned and Future

The installed DC power capacity up to 2021 is about 300GW and it will continue to grow rapidly and most likely double by the year 2050 as projected in Figure 3. Multi-terminal HVDC and HVDC Grids offer additional benefits for system integration and energy exchange. 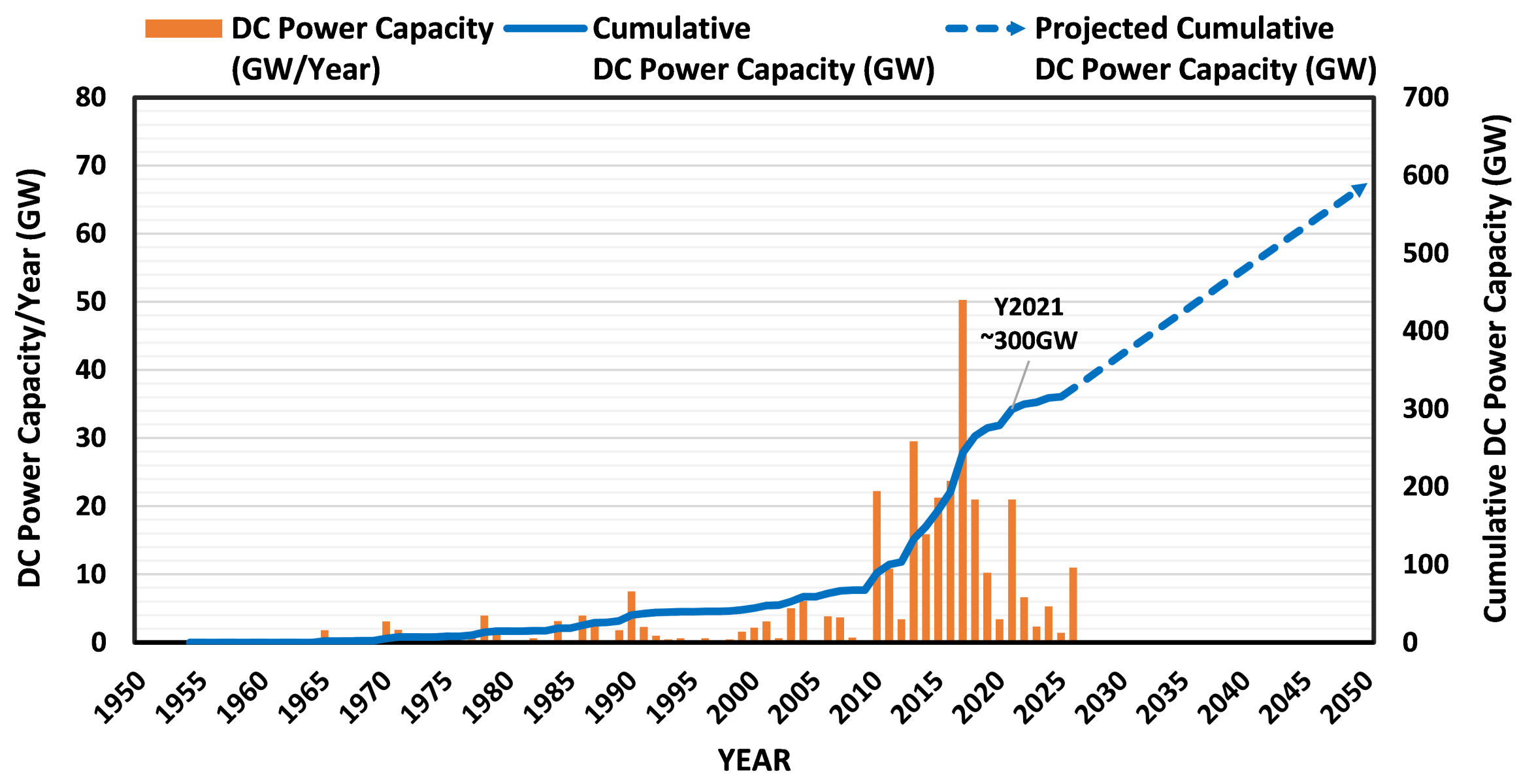 The growth and proliferation of HVDC systems and retirement of conventional large synchronous machines has brought new technical challenges such as the need for optimized reactive power control schemes, operation under low short circuit level conditions as well as the reduction in inertia coupled with the inherently low inertia available with wind generation which can be solved with advanced control features and proper coordination between the controls of the wind power plants and the HVDC system.

The technological needs have driven the development of additional power electronic devices to enhance the performance of AC systems which are collectively known as FACTS (Flexible AC Transmission Systems).  FACTS devices such as SVC and STATCOM can provide additional steady state and dynamic AC voltage support and further improve the overall dynamic performance at both transmission and distribution levels. Other PE based devices such as UPFC which have seen limited use due to device limitations have recently been receiving renewed attention due to the emergence of  MMC (modular multilevel converter) technology and will  allow optimized power flow control together with reactive power support.

MMC converter technology together with developments in Battery technology is also enabling the development of grid scale energy storage systems. These systems have the potential to fill intermittency of supply which has been a major drawback of constraining the penetration renewable energy into the power grids around the world.

Deployment of increased power electronics-based devices and systems complicates the characteristics of the existing and future network in view of the overall system operation, control, and protection. It requires the systems to be designed and studied collaboratively among all the power system stakeholders locally, regionally, inter-regionally and globally. Study tools and models need to be constantly developed and updated to allow accurate, flexible, expandable, inter-operatable, proficient modelling of variable system conditions.

The role of CIGRE Study Committee B4 is becoming increasingly important to ensure the exchange of ideas, and dissemination of knowledge that will influence the direction of future developments.  Study Committee B4 has published eighty-one (81) Technical Brochures covering various aspects of HVDC systems and power electronics-based devices over the past 30 years as shown in Figure 4. 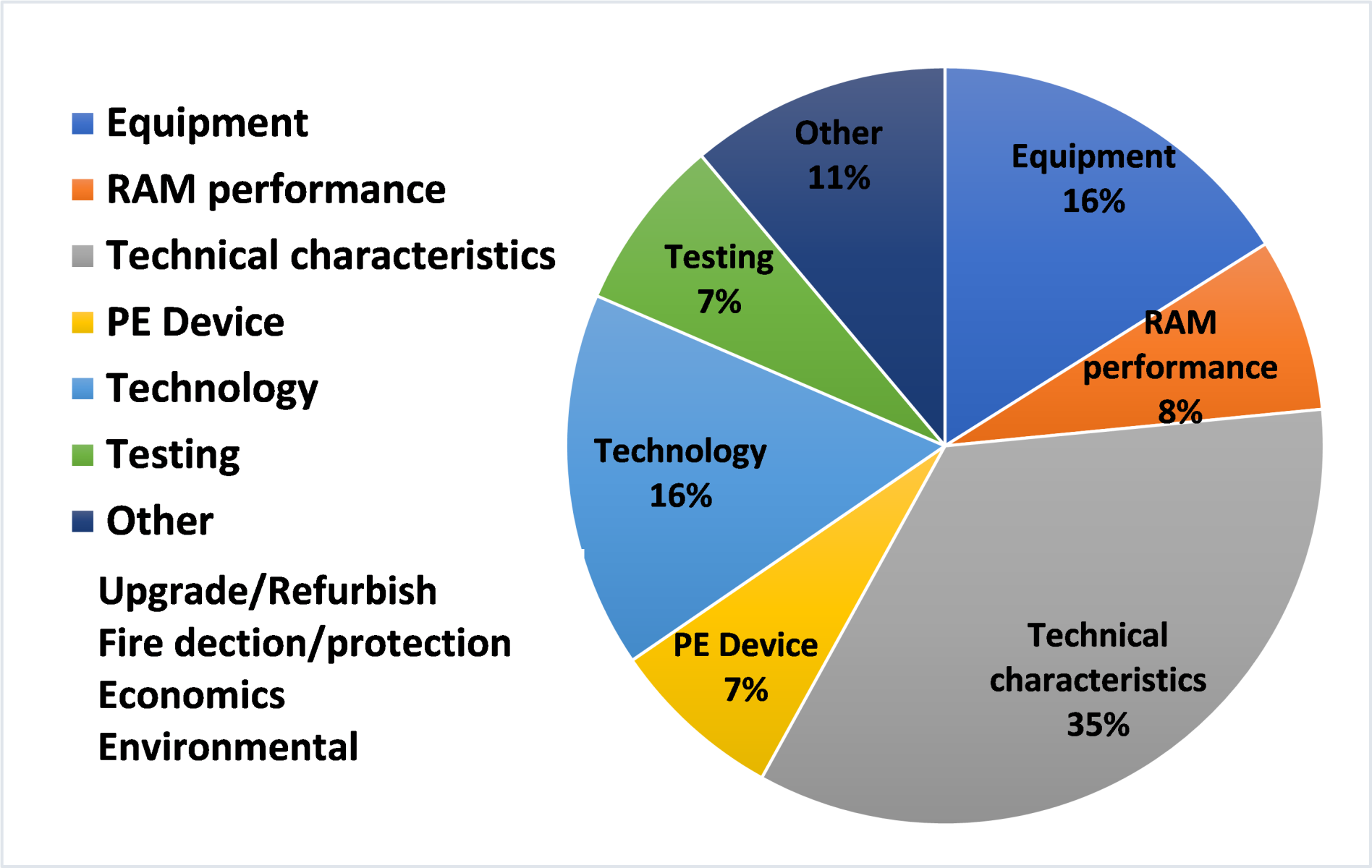 The scope of B4 has been  widened to cover the application of DC and power electronics in  renewable generation and integration, distribution, power quality and energy storage. SC B4 will continue to lead in the exchange of knowledge by dedicated industry leaders in the areas of technology development and application of DC systems and power electronics to provide solutions to ensure and thus enable and ensure reliable power system while facilitating the transition to a global low-carbon economy.