One important outcome from the 4.0 Industrial Thinking era brings up systems-to-systems approach integration, embracing cyber-physical systems (CPS), the internet of things (IoT), industrial internet of things (IIoT), cognitive computing and artificial intelligence. If a single key word could epitomize what we are facing, it would be the Market Transformation era.

As for any transformation, traditional boundaries or well-established frontier limits may need to be reexamined, such as systems-to-systems interoperability, as synergy may neutralize those limits. Much more dynamism is expected from now on. Under these premises, the scaled commercial use of the Green Hydrogen – the P2G (Power-to-Gas) approach appears to be one key factor for frontiers breaking. The electric power utilities under this scenario are seen to be THE key contributors towards this most fundamental and unavoidable transformation.

The question is: how close or how far are we from considering the P2G/Green H2 era a reality? More importantly: is there any other option for a sustainable and breathable world for our future generations? Green Hydrogen can be used for energy distribution across sectors and regions and as a buffer for renewables. It provides a way to decarbonize segments in power, transport, buildings, and industry, which would otherwise be difficult to decarbonize.

To gain some perspective on how close or distant we still are from a scalable Green Hydrogen being a reality, let us make some rehearsal exercises, very simplified, with the purpose of better understanding.

c. These avoided amounts may be traded as CO2 Removal Certificates (CORCs).

Figure 1 [1] shows the process arrangement that could be associated, for example, to wind power generation plants, to enhance its economic feasibility. 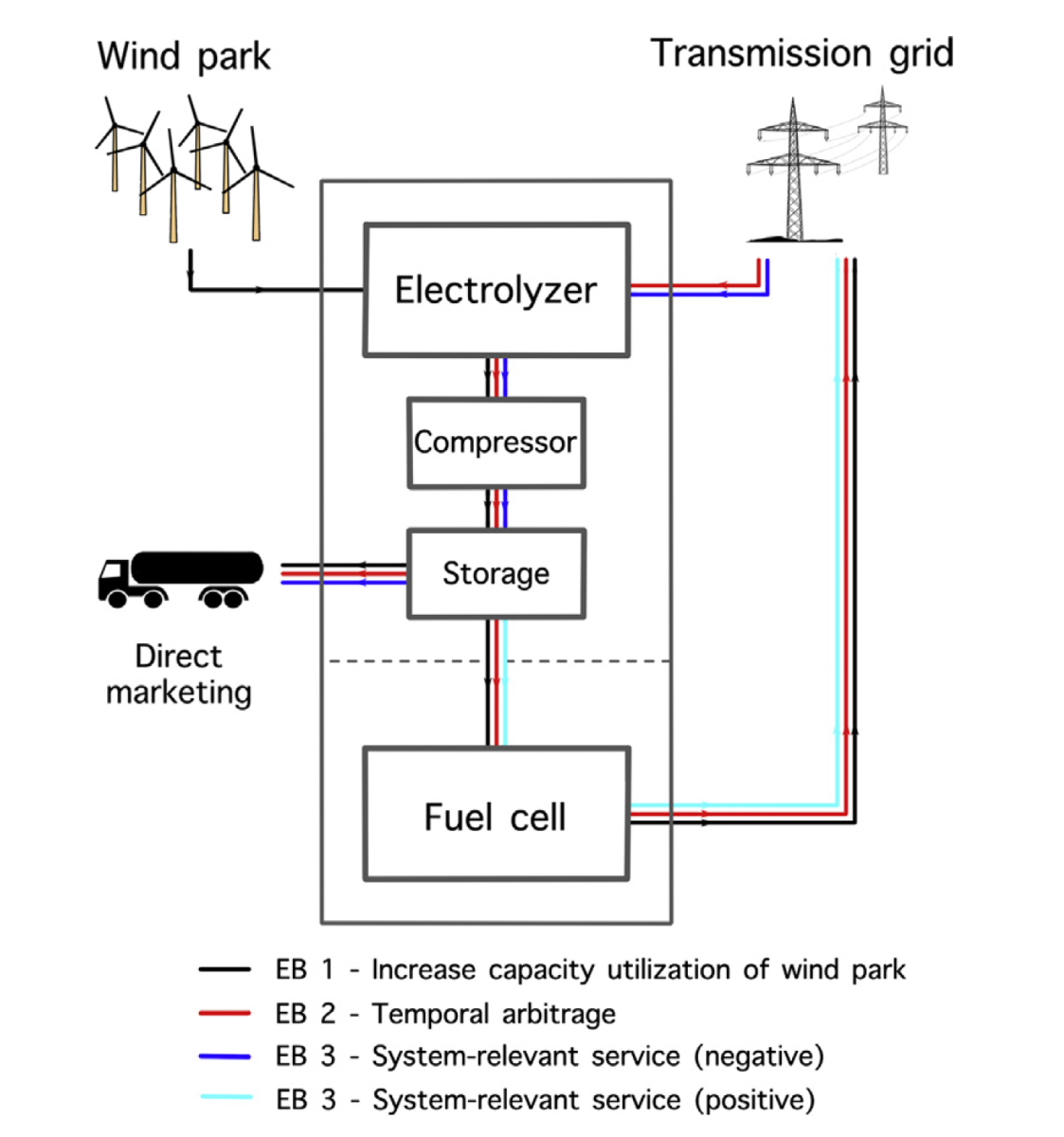 As far as transporting and exploring the direct Hydrogen market (outlined in the Figure 1 above as direct marketing) emerges as an alternative, many R&D studies are being carried out with the goal of anticipating the need to adapt existing natural gas pipelines equipment for Hydrogen injection in large quantities, particularly in downstream installations [2,3]. Progressively, rates starting from 10% levels seem to be achievable with limited changes to the infrastructures. The down side of blending hydrogen into natural gas is that it is very difficult and expensive to separate hydrogen from methane again, for instance for use in fuel cell electric vehicles. Hence, in the long run, a dedicated hydrogen pipeline grid will be preferred.

In addition, as mentioned above, thermochemical water splitting by means of high temperatures — e.g., from concentrated solar power, or from heat of nuclear power reactions —and chemical reactions can be used to produce Hydrogen and Oxygen from water. This is a long-term technology pathway, with potential low or no greenhouse gas emissions.

The process will be based on:

In Figure 2: (a) a field of heliostat mirrors concentrates sunlight onto a central reactor tower; and (b) dish mirrors focus sunlight onto an attached reactor module. The solar-generated high-temperature heat can be used to drive thermochemical reactions that produce hydrogen. Numerous solar thermochemical water-splitting cycles have been investigated for hydrogen production, each with different sets of operating conditions, engineering challenges, and hydrogen production opportunities.

In summary, the exercise, figures, and options presented, rather than being a truly financial calculation, aims at addressing the first part of the question raised above.

Therefore, we urgently need to respond to these issues:

We are facing challenging times for re-modeling our businesses models.

The P2G era opens a paramount set of new opportunities for expanding the electricity-based modern societies.

CIGRE is deeply involved through its working bodies and technical activities to provide state-of-the-art information and technological successful experiences sharing.

In addition to future options for our planet, we could also address the question of which companies could survive without making the 4.0 new technologies a central vision for their business.

This article has been prepared in the center of the covid-19 health crisis as our belief on a close return to normality and healthy existence.