For ten years, the United Nations Environment Programme (UNEP) has produced annual Emissions Gap Reports1, tracking the difference between where global greenhouse gas emissions are heading and where they need to be for the world to get on track to keeping global warming within the limits agreed by countries under the United Nations Framework Convention on Climate Change (UNFCCC).

The findings of the reports are sobering: despite scientific warnings, increased political and societal attention and the milestone Paris Agreement, global greenhouse gas (GHG) emissions continued to increase at an average rate of 1.5% per year in the last decade and the emissions gap is larger than ever. The emissions gap in 2030 is 15 gigatons of CO2 equivalent (GtCO2e) for a 2°C goal, and 32 GtCO2e for a 1.5°C goal. To give an indication of the magnitude of this gap, the total emissions of the six largest emitters2 was around 32 GtCO2e in 2018. The current level of climate ambition sets us on course to a global average temperature increase of 3.2°C by the end of the century.

The challenge is clear: if we want to keep the Paris Agreement goals of limiting global warming to well below 2°C and pursuing a 1.5°C goal alive, postponing transformational action is no longer an option. In terms of country ambition and action, countries must increase the ambition level of their current climate mitigation pledges threefold to achieve a 2°C goal and more than fivefold to achieve the 1.5°C goal. Translated into annual emission reduction rates, the cuts in global emissions required per year from 2020 to 2030 are close to 3% for a 2°C goal and more than 7% per year on average for the 1.5°C goal. The order of magnitude of these rates has no historic precedent.

The year 2020 was set to become a new landmark for enhanced climate mitigation ambition and action, with countries expected to submit strengthened mitigation pledges and long-term strategies for decarbonisation of their economies to the UNFCCC. The coronavirus pandemic has already had implications for the UNFCCC timeline, with the annual Conference of the Parties to the UNFCCC postponed to 2021 and uncertainty surrounding submission dates. At the same time, it is increasingly clear that the economic downturn caused by the pandemic will result in a decline in global CO2 emissions from energy use and industry. A new report by the International Energy Agency3 finds that global energy demand declined by 3.8% in the first quarter of 2020. How large the decline will be for the rest of 2020 and what the longer run implications are depends on how the situation develops. However, evidence from previous crises, including the financial crisis in 2008, suggests that emission declines will be transitory, unless the crisis spurs the structural changes required for sustained emission reductions. Climate action remains as urgent as ever and the design of the economic recovery will be crucial in shaping long-term emission pathways and our ability to reach the Paris Agreement goals.

Our future depends on mitigation action by all countries. However, the emissions gap reports have a special focus on G20 member states, as they account for almost 78% of global emissions and thus largely determine global emission trends and the extent to which the 2030 emissions gap will be bridged. Keeping in mind that the current 2030 emission reduction pledges made by countries are woefully inadequate to reach the Paris Agreement Goals, the Gap reports show that, collectively, the G20 members are not yet on track to achieving their 2030 pledges. G20 members differ widely in their mitigation targets, their progress towards them and the mitigation policies in place. Still, collectively they have not yet taken on transformative climate commitments at the breadth and scale necessary. To illustrate, five G20 members4 have committed to long-term zero emission targets, while the remaining 15 G20 members have not yet committed to zero emission targets. Although many countries, including most G20 members, have committed to net zero deforestation targets in the last few decades, these commitments are often not supported by action on the ground. Five G20 members5 have or are in the process of passing legislation to phase out coal-fired power plants by a certain year, but fifteen G20 members have no binding phase-out plans. Globally the 13 countries that do have such plans only account for about 5% of global CO2 emissions from coal-based electricity generation. Economy-wide climate action remains extremely limited in other areas, such as a complete phase-out of fossil-fuel subsidies, comprehensive and ambitious carbon pricing and making all finance flows consistent with the Paris Agreement.

We have the solutions to get on track

Is it possible to bridge the emissions gap? The short answer is yes, but time is running out. The 2017 gap report6 provided a detailed assessment of sectoral mitigation options in 2030, which shows that the economic and technical mitigation potential is sufficient to get on track to well below 2oC and 1.5oC. A substantial part of the potential can be realized through scaling up and replicating existing, well-proven policies that simultaneously contribute to key Sustainable Development Goals. Notably, a large part of the potential is available in just six areas: solar energy, wind energy, efficient appliances, efficient passenger cars, afforestation and stopping deforestation. These six areas alone present a combined potential of up to 21 GtCO2e per year by 2030, underlining that the policies and technologies needed to bridge the gap are readily available and at limited costs - offering no excuse for inaction.

Renewables and energy efficiency, in combination with electrification of end uses (including transport) and a phase out of coal, are key to a successful transition of the global energy sector and to driving down energy-related CO2 emissions. Fortunately, many drivers of climate action have changed in the last years, with several options for ambitious climate action becoming less costly, more numerous and better understood. First, technological and economic developments present opportunities to decarbonize the economy, especially the energy sector, at a cost that is lower than ever. A key example is the cost of renewable energy, where real-life cost declines continue to outpace projections. Renewables are by now the cheapest source of new power generation in most of the world, with the global weighted average purchase or auction price for new utility-scale solar power photovoltaic systems and utility-scale onshore wind turbines projected to compete with the marginal operating cost of existing coal plants by 2020. Second, the synergies between climate action and economic growth and development objectives, including options for addressing distributional impacts, are better understood. Finally, policy momentum across various levels of government, as well as a surge in climate action commitments by non-state actors, are creating opportunities for countries to engage in real transitions.

There are many social, political, technical and economic challenges associated with the transition required to decarbonize the global economy. The transition should be designed to bring multiple co-benefits for humanity and planetary support systems, ranging, for example, from reducing air pollution, improving human health, establishing sustainable energy systems and industrial production processes, making consumption and services more efficient and sufficient, employing less-intensive agricultural practices and mitigating biodiversity loss to liveable cities. If the multiple co-benefits associated with closing the emissions gap are fully realized, the transition will provide a vital contribution to achieving the Sustainable Development Goals.

Bridging the emissions gap, while presenting an unprecedented challenge, is still possible. Postponing transformational climate action is no longer an option, if we want the goals of the Paris Agreement to remain within reach. 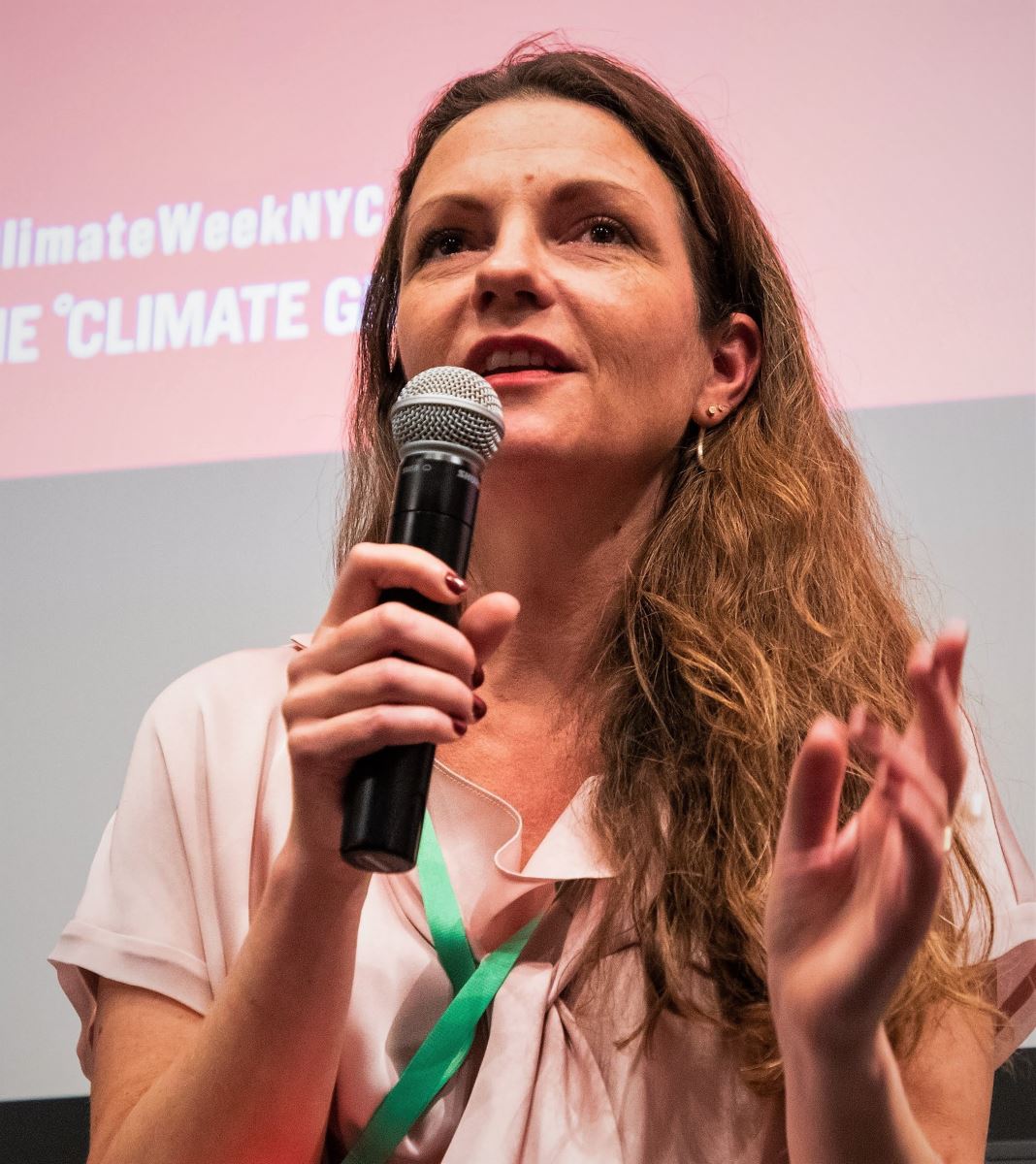 BIO: Anne Olhoff is Head of Strategy for Climate Planning and Policy at the UNEP DTU Partnership, a UNEP collaborating centre at the Technical University of Denmark. She holds a PhD in economics and has been managing and contributing to the UNEP Emissions Gap Reports since 2012.

1The reports are available at https://www.unenvironment.org/resources/emissions-gap-report-2019.