This paper summarizes the contributions of 4 distinguished experts, who present the decarbonization goals of the energy systems in Europe, USA, China and Australia at the CIGRE/ETIP SNET panel in August 2021. The presentations include the status of the energy systems, the main challenges faced in advancing their transition, set time-schedules and milestones for achieving transition goals, and the research and innovation requirements and plans to tackle them. Specific research programmes announced or planned are briefly described. In all contributions, it is clearly shown that the vision of energy decarbonization is shared among all parts. The challenges in energy system transition are similar and despite the differences due to particular regional characteristics, the steps to the common destination are broadly aligned. The R&I challenges are also similar, highlighting the value of exchanging knowledge and experiences about the way the energy transition is planned and realized at international level, especially among leading countries that share the common vision of energy systems decarbonization.

In July 2021, the European Commission has set the goals for the Energy Systems, named FIT for 55. This refers to the preparation of the system to achieve 55% reduction of greenhouse gas emissions in the interval 1990-2030 and minimal greenhouse gases by the year 2050. 65% of tertiary sector heating will be covered by electricity, the use of natural gas should be far below 20%, and road transportation mainly by electric vehicles and carbon renewable electric cars. This creates stress on the electricity distribution network by peaks that need to be managed. What is also very important is that citizens and consumer communities must be activated. Hydrogen and biofuels should be used in the proper way, and requires that the right amounts of clean hydrogen and biofuels are produced in the system. New seasonal storage solutions are required, not only batteries but further in gases. 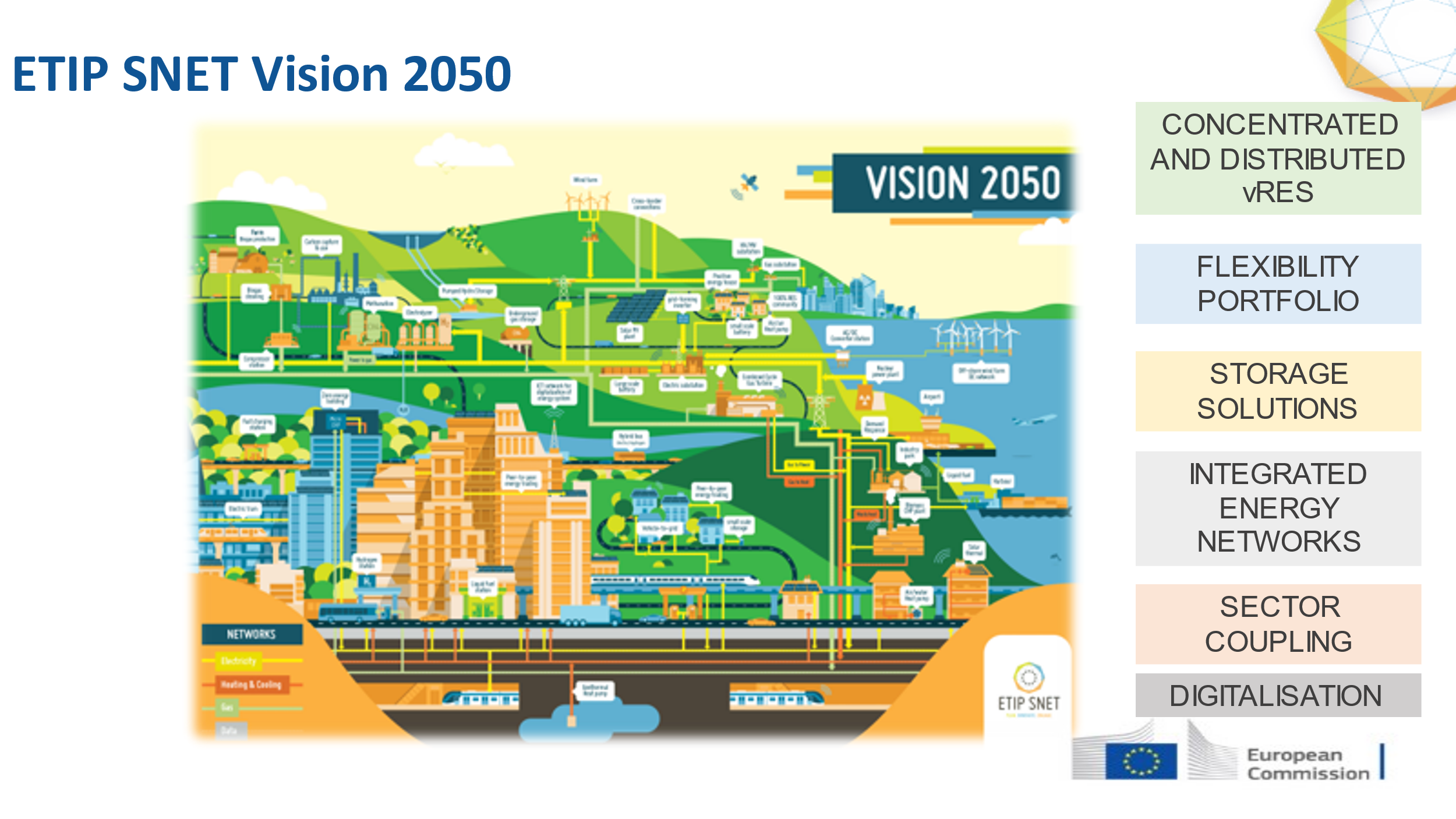 ETIP SNET is the European technology platform for Smart Networks for Energy Transition. Fig. 1. presents the overview slide of the ETIP SNET Vision for 2050, published in 2018. The future energy system is depicted as an integrated energy system, with many components and interconnected networks, not only for electricity, but also heating and cooling, gas, and data networks. The policy directions in Europe see the prosumer in the center, who needs to be engaged as an active prosumer. Around him/her operate markets, communication, and digital infrastructure and at the bottom, the key-component, the physical energy system. The electricity networks are interconnected with gas, heating and cooling, transport and storage networks: they form the backbone of the integrated physical energy system due to their efficiency and flexibility. The building blocks shown in Fig. 1. are the ingredients of ETIP SNET’s vision for 2050, the R&I Roadmap for 2020-2030 and the R&I Implementation plan for the next 4 years.

On-going research in Europe is managed in a huge R&I program, the Horizon Europe, that includes energy. In the period 2021-2027, almost 100 billion euros are devoted for research and innovation, 15 billion euros of which are devoted to Climate, Energy and Mobility.

In the USA, the electricity network is the backbone of the integrated energy system and electricity is the energy resource for other energy systems, especially transportation and heat. The important research challenges faced by the US system:

To solve these challenges, FERC (Federal Energy Regulatory Commission) put out an order called “order 2222” that requires wholesale markets to integrate distributed resources. This is a very big collaborative project that is currently in a phase of requirements definitions.

In the USA there are already challenges to maintain the reliability and resilience of the electricity network. The penetration level of renewables is in the 20 to 30% range going up to raising penetration levels to 75% to 80% and then 85% to 90% and specify the operational requirements for these systems presents great challenges. The resilience issues caused by polar vortex in Texas (2021), and during the recent hot summer in California, are characteristic examples.  A big part of the solution is through the engagement of the customer, the community and distributed resources, making them part of the equation for reliability and resiliency. The US  2030 goals can be summarized as clean up electricity, wide electrification, and assurance that the grid can handle it. The longer term of reaching no emissions requires to find alternative low carbon fuels.

Figure 2. provides a summary of the US current position: continuing to develop clean energy resources for the electric system and building the electric system that can support this development in the longer term. It will also involve integration of hydrogen and other clean fuels. At the same time, the grid and markets are going to maintain reliability and resiliency.  The way to make it possible and affordable is through digital transformation (sensors, communication infrastructure). 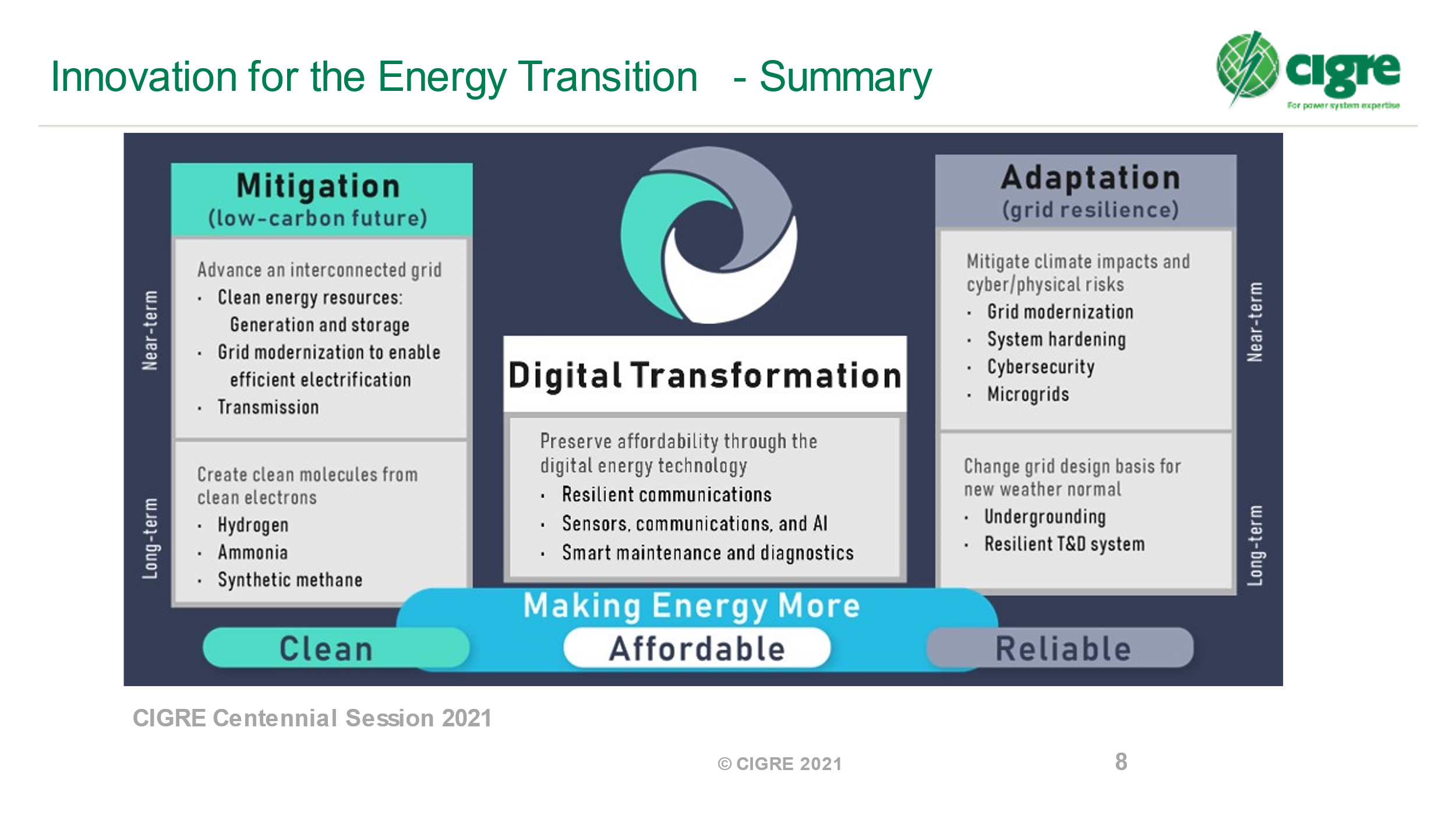 Figure 2 - Summary of innovation for US Energy transition

During the United Nation General Assembly in September 2020, China’s president Xi Jinping announced, that China is going to reach the carbon peak by 2030 and achieve neutrality by 2060. The most important parts of the plan concerns building a clean, low-carbon, safe and efficient energy system. CSG (China Southern Grid) is going to improve the utilization efficiency, strengthen renewable energy penetration and build a New Energy Dominated Power System (NEDPS).

The milestones towards the new power system by CSG comprise the following 4 steps: 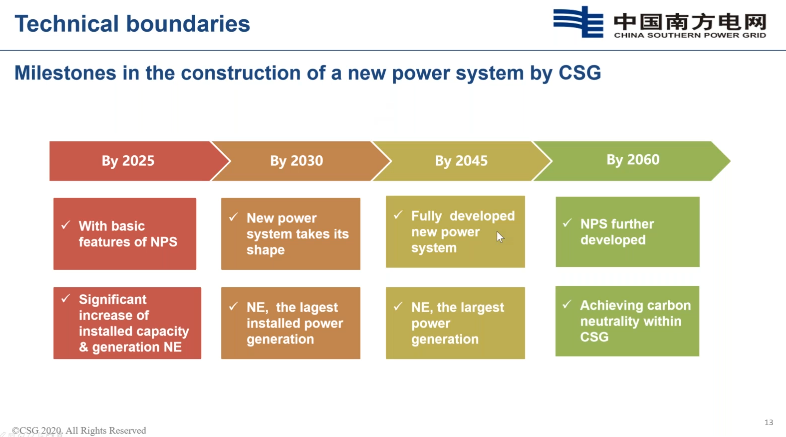 Figure 3 - Milestones towards the new power system by CSG

Challenges in guaranteeing power supply are:

The R&I Challenges toward building a new power system are:

Australia’s goals are to achieve an affordable, reliable energy while realizing a transition to a low emission future. For this, the system’s security, reliability and strength towards this transition needs to be ensured. The short-term goal up to 2025, is that the system operators are confident to run the energy system with an instantaneous 100% renewable energy sources penetration.

The challenges towards this goal are:

After achieving   the short- term goal, i.e., the challenge of secure and reliable operation with higher RES penetration, the path towards 2050 includes doubling of the electricity system throughput based on the electrification of Australian industries and of the transport sector. Aiming at a level of hydrogen exports, like the current exports of fossil-based fuels, means a factor of 5-fold increase in the energy throughput of the electricity system, since electricity coming from large scale Renewables will be the energy vector for hydrogen production.

The next challenge after system security, is the way to improve the utilization of system, achieving much higher throughput of energy with the minimum upgrades in the transmission and distribution systems. This can be achieved by coordinating energy generation and loads through digitalization and consumer involvement.

In summary, three key points need to be considered: 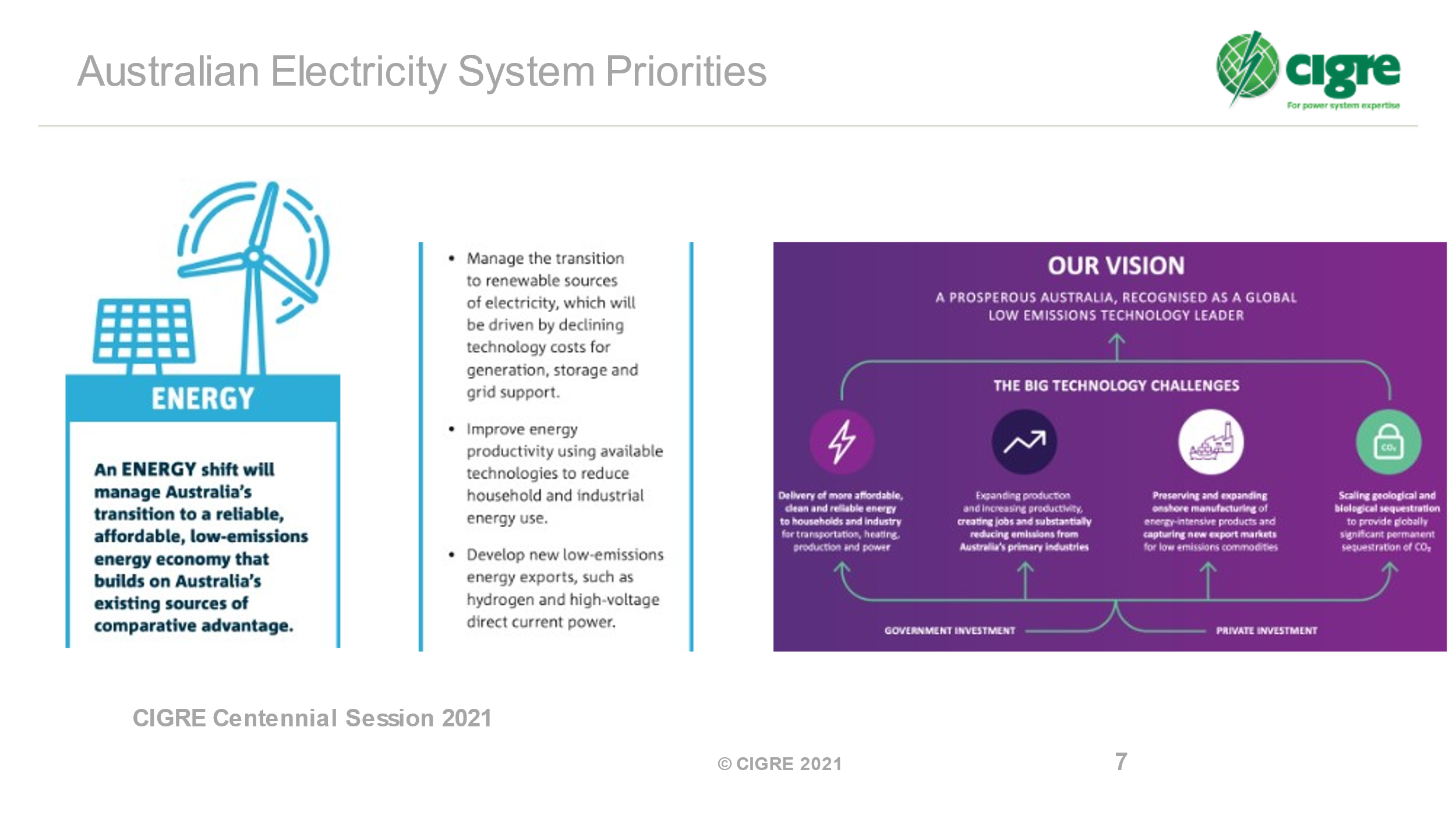 There are six key R&I challenges being tackled: 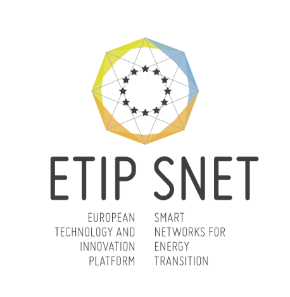 Since 2016, the key energy system players in Europe, represented through their EU associations, platforms and national stakeholders, started a strong and unique cooperation under the umbrella of ETIP SNET. With the support of hundreds of industry and research experts throughout Europe, it guides European R&I activities in the area of Smart Energy Networks. This covers areas such as energy systems management, storage and interface between power, gas, heat or transport networks, flexible generation, digitalisation of the energy systems, and energy customer involvement. Learn more > (https://www.etip-snet.eu/)