An ongoing activity in Study Committee B4 tackles the relevant aspect of a combined use of both HVDC technologies available, the Thyristor based Line Commutated Converter (LCC) and the Insulated Gate Base Transistor (IGBT) Voltage Source Converter (VSC). This is referred to as hybrid LCC/VSC HVDC systems.

The purpose of the Working Group B4.79 is to comprehensively discuss the hybrid HVDC systems, including:

During the last years, a great progress about this innovative technology has been observed. The experience from this working group will probably reorient many planning efforts worldwide towards expanding the application of long distances and high MW transmission systems in which, for instance, commutation failures cannot be accepted by the receiving AC system as well as neither DC overhead line faults with slow recovery times.

In addition, to leverage the importance of the working group, it should be mentioned that the China Southern Power Grid (CSG) has put into operation the world’s first station-station type of hybrid HVDC project, known as Wudongde HVDC project . The success of this project proves that the station-station type of hybrid HVDC is technically feasible. This hybrid HVDC system is constructed as a three-terminal, one LCC rectifier  (8000MW) and two inverter stations (5000MW and 3000MW) with a nominal DC voltage of ± 800 kV and a total transmission capacity of 8000MW. The total length of the transmission line is about 1452 km.

This project has successfully demonstrated several key technical aspects that are essential and critical to achieve a coordinated operation of mixed LCC and VSC converter stations in a Hybrid HVDC system. The first aspect is the electrical coordination between LCC and VSC converter stations. The sending end of Wudongde HVDC system adopts the conventional LCC technology while both receiving ends adopt VSC technology as shown in Figure 1. 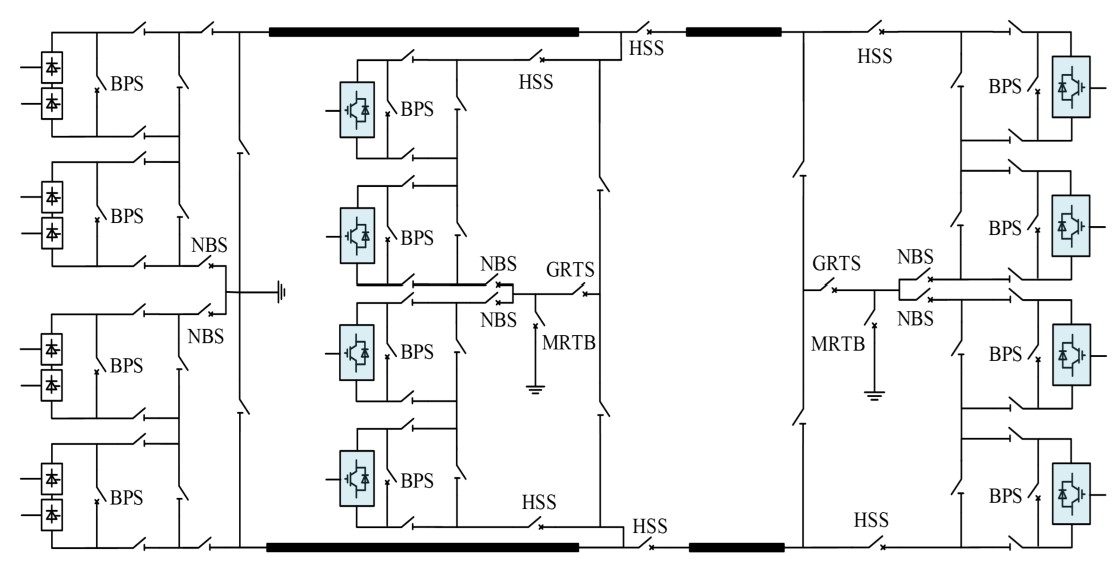 For LCC, two typical 400kV 12-pulse valves are connected in series. For VSC, double 400kV converters are used to match the rating of LCC. The new hybrid MMC was applied to match the DC voltage range of LCC, and more importantly to clear the overhead DC line faults. The hybrid VSC converter station contains 70% full-bridge SM (FBSM) and 30% half-bridge SM (HBSM). Such a VSC topology can meet the requirement of operation flexibility, such as the reduced DC voltage operation (usually 70%-80% p.u.) and the 400/800 kV operation, but with less investment and lower power losses. Figure 2 shows the site view of the 800kV VSC station.

The second aspect is the coordinating control of LCC and VSC. For the station-station type of hybrid HVDC system, a basic control principle was proposed and applied in the Wudongde HVDC project. As shown in Figure 3, in which the red line represents the VSC's control characteristics and the blue line represents the LCC's control characteristics. In order to enhance the capability of HVDC system against external disturbances, LCC is configured with voltage margin control at the same time, and the voltage margin ?U is a 5% while VSC is configured with current margin control, and the current margin ?I is generally 10%. Therefore, LCC has three basic control curves, namely DC current control, DC voltage control and minimum trigger angle control; VSC has two control curves, namely DC voltage control and DC current control. The basic control characteristics is independent of VSC topology. In case the "Full-bridge VSC" is adopt, the control characteristics of hybrid HVDC can be optimized as shown in Figure 4, in which the Voltage Dependent Current Order Limiter (VDCOL) is added. It is similar to that of an LCC-HVDC system.

This project proves the concept of the Hybrid HVDC project consisting of and combining the benefits of both LCC and VSC technologies. This is a significant step forward on the HVDC technology development as it provides a viable solution with improved system performance to transmit large power to load center embedded in a relatively weak or multi-infeed network. WG B4.79 is addressing all aspects of LCC/VSC Hybrid HVDC system so the Hybrid HVDC solution will be technically ready to be adopted for various applications.