South African power utility company, ESKOM’s fleet of reticulation transformers is greater than 200,000. More than 90% of which are pole mounted transformers (PMT). In the winter months (May to September) the average PMT failure event is 2200. This costs the company R70.4Million ($4.1Million) annually. Additionally, this has a significantly negative impact (>10%) on system average interruption duration index (SAIDI). PMT failure events during the winter period are predominantly due to overloading therefore a remote temperature logging (RTL) system was developed to detect the overload condition and alert field services to upgrade the PMT before failure. The system is made up of 2 parts: the solar powered, temperature sensing devices with remote communication and a custom master station software. Using this system, it is now possible to predict the failure of PMTs (due to overloading) months before it happens, allowing enough time for replacement with a suitably sized PMT.

The overload condition occurs when a transformer sources more than 150% of its maximum rated current. This puts undue strain on the transformer’s windings, resulting in excessive heat generation in its windings. The excessive heat degrades the transformer oil and the insulation paper’s ability to insulate the winding which eventually leads to a complete insulation breakdown and hence catastrophic failure. While the increase in electricity usage during the winter period contributes significantly to the overloading of transformers, illegal connections and improperly planned electrification projects are major contributors to overloading. However, addressing the societal causes of overloading was not the focus of this work. Instead, this work seeks to develop an early identification method for overloaded transformers to minimize its impact on network performance, operating expenditure and customer satisfaction. It is also vital to the economy that the power utility continues to operate and maintain the existing infrastructure while minimizing operating expenditure.

Initially, existing instruments such as load recorders, thermal scanners and thermal stickers (Figure 1) were used in an attempt to provide a solution. However, none these methods were scalable across ESKOM’s fleet of PMTs (> 100,000) since the process of retrieving data from the transformer to the decision makers can be cumbersome and expensive. These were therefore not considered as a viable, long term solution.

The RTL system was therefore developed to automate the data retrieval process. The system applies the findings of an internal ESKOM research, which concluded that a tank temperature reading of 82°C or more signifies that the transformer is overloaded i.e. producing greater than 150% of its rated current.

The RTL is a temperature sensing device which attaches to the PMT tank through magnets embedded in its enclosure. The device weighs 300 grams, is battery powered and the battery is recharged through the on-board solar panel. A fully charged RTL can function for more than 40 days with no daylight to recharge the battery.

The RTL is installed from the ground level thus eliminating the need to isolate the PMT and switch off customers. A special link stick attachment has also been designed to aid easy installation and removal of the device. The RTL can also be remotely reconfigurable. Time stamped temperature data is periodically transmitted to the master station via the cellular network. When needed, the RTL generates alarms and sends an alarm notification to the master station. The alarms include: Battery Low, Sensor error, Power down and High temperature. The total cost of the components required to assemble an RTL is R950 ($55). A low monthly SIM cost of R7 ($0.41) per device is achieved by positioning RTLs as edge computing devices containing firmware which analyses the tank temperature and transfers only the important information to the master station for storage and offline analysis. A heat shielding adhesive is wrapped around the back of the device to prevent the heat radiating from an overloaded PMT from damaging the electronics in the enclosure. As shown in figure 2, the RTL is installed near the top of the PMT so that the measured temperature is as close to the top oil temperature as possible. 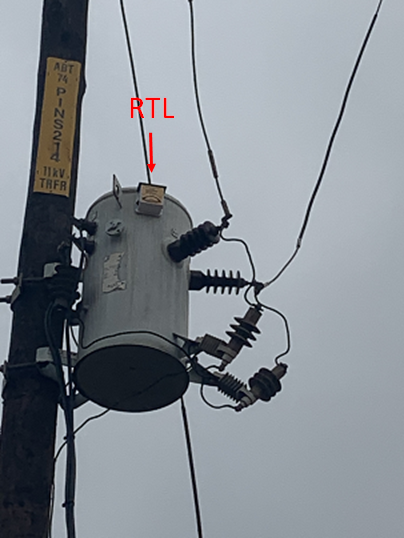 Figure 2 - An RTL installed on a transformer tank

The master station (known as RTL Master) is a software application that stores the data received from temperature loggers and analyses the data. The application is hosted on a Windows PC which has a modem attached. The RTL master generates a list of PMTs at-risk (whose temperatures are above the overload threshold) and automatically emails the list to responsible personnel. The RTL master also tracks the data it receives from RTLs and will generate a COMMS failure alarm if a device stops sending data. Persons responsible for the RTL will be dispatched to replace the device.

There are 2 major findings from the introduction of the temperature logging system. Firstly, by using the temperature logger a PMT can be classified into 1 of 3 load categories. Secondly, using a PMT’s tank temperature in the summer months it is now possible to predict if the PMT will be overloaded during the following winter period.

Using data collected from over 800 PMTs (at 1 month intervals) between 2016 and 2018, it is possible to classify PMT load into the following: Under-loaded, Loaded, Overloaded

In this category the PMT load is negligible (<50%) in comparison to its capacity. The temperature profile measured from the tank follows the same pattern as ambient temperature. The maximum temperature is typically less than 40°C. This is shown in Figure 3 below: 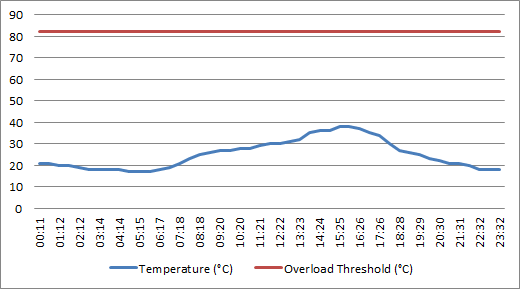 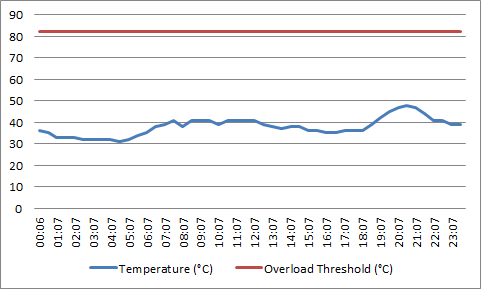 In this category the PMT’s load is significant i.e. >50% but not overloaded. Therefore the tank temperature will change to reflect the highest loading periods of the day. These are typically 5AM to 8AM and 5PM to 8PM. The maximum temperature is typically greater than 40°C but less than 82°C. This is shown in Figure 4 above:

In this category the PMT is overloaded i.e. >150% load. The tank temperature exceeds 82°C either during the morning peak or evening peak or during both peaks. As seen in Figure 5 below, tank temperatures can exceed the oil flash point thus posing a significant safety and fire risk

Certain PMTs will exhibit maximum temperatures less than 82°C in summer. However, increased electricity usage in the winter period will cause the tank temperature to exceed the overload threshold. This makes it impossible to identify these PMTs as overloaded if their temperature was only recorded during a brief period in the summer. By recording the temperatures of 50 overloaded PMTs from the winter of 2017 to the winter of 2018 the load pattern (shown in Figure 6 below) emerged.

The blue rectangle marks the summer period, which is between January and February 2018. The average maximum temperature on all 50 PMTs was approximately 60°C during this period but all 50 PMTs exceeded 82°C in the following winter. This led to the conclusion that 60°C can be selected as the summer threshold temperature.

RTLs make failure prediction (due to overloading) a reality for an important distribution asset such as PMTs, they also provide additional benefits to the wider distribution business:

Load visibility: Through temperature, RTLs provide an estimation of the percentage loading on a PMT. This can be beneficial to electrification project planning, Network upgrade planning and detection of bulk illegal connection on PMTs

Environmental: Overloaded PMT failures can often be catastrophic, causing the transformer oil to spill on the ground, kill existing vegetation and prevent growth of new vegetation. Such hazardous spillage can be prevented by replacing an overloaded PMT before failure.

Safety: Catastrophic failure of PMTs can cause injury to members of the public and may even endanger their lives. This may leave the power utility open to safety claims. Upgrading a PMT prevents this.

The RTL system is a step towards the deployment of 4th industrial revolution devices to monitor assets. The intellectual properties created during the development of this system are owned by ESKOM. Presently, there are other ongoing pilot projects whose aim is to (non-intrusively) detect additional failure modes on PMT. These devices are based on the same low cost hardware designs used in the development of the RTL.

Using the RTL system, 171 PMTs have been detected as overloaded over the last 5 years. Seventy-two of these PMTs have been upgraded. This is a savings of at least R2.3Million ($135 000). In that period, 280 loggers have been assembled for a total cost of R260 000 ($15 000), yielding a return on investment (ROI) ratio of 39:1 over the 5 year period and making mass RTL deployment a sensible choice.

Mass implementation of this system will allow power utilities to make a significant leap in their approach to overloaded PMT failures i.e. from reactive to proactive. However, a collaborative effort will be required from all role players (Network Planning, Network Engineering Design and field services) so that PMT upgrades can be promptly executed.